The Climate Has Changed

This is a turning point, but there’s still time to act. In a month’s time, people in Australia and around the world will demand a Fossil Free future. On every continent we will stand together and say — enough is enough.
As temperatures rise, so do we.

350.org has  just released a video on climate impacts people are facing around the world right now. Watch and SHARE it and let’s get people making the links between rising temperatures and extreme weather, climate change, and what they can do. 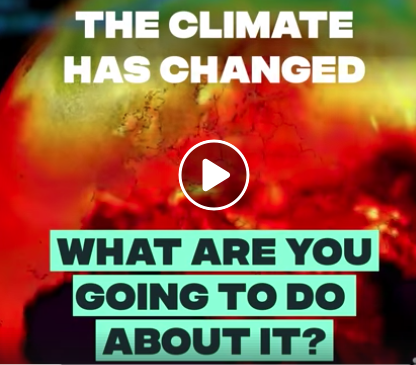 The extreme heat experienced around the world over the past few weeks has broken untold records. Lives have been tragically lost in heat waves in Japan and wildfires in Greece1, 2, whilst Ouargla in North Africa reached a staggering 51.3C and unprecedented fires have burned across the Arctic circle3, 4. California has experience the world’s hottest rain ever recorded and is in the grip of the largest and most expensive wildfire the state has ever seen.5, 6

In Australia, we continue to see the devastating impacts of drought and its impact on our farmers and their livestock. Malcolm Turnbull has finally admitted this drought is linked to climate change… even if he’s not going to do anything about it.

But we are. We’re going to Rise and demand more from local leaders all over the world.

Will YOU Rise with us?

Your support will help us achieve over 30 actions and events around Australia on September 8 calling on decision-makers locally for commitments on climate change.

Here is just  some of what is in store:

There will be many more!

Climate scientists have been taken aback by the severity of the heatwave we’ve seen these past weeks, but “hothouse earth” is not our destiny – if we act now.7

Bold action on climate change couldn’t be more urgent. But whilst we’re starting to see a shift in climate leadership from national governments — like the Irish government divesting from fossil fuels last month8, the pace is painfully slow.

So that’s why 350 is working with organisations around the world to call on local decision-makers everywhere  to take a lead in building the Fossil Free future we need. Local leaders can do their part to keep fossil fuels in the ground, demand an end to new coal, oil and gas projects like Adani and build a just, 100% renewably-powered future.

They can, and they have to.

Together, let’s Rise for Climate Action!

Andrew, for the 350 Australia team

2) Extreme heat, wildfires and the cost of climate change

3) It Was Absurdly Hot in North Africa Yesterday

7) Terrified by ‘hothouse Earth’? Don’t despair — do something.